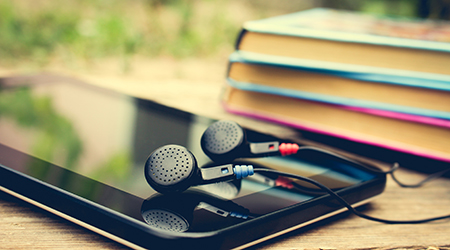 Podcast Movement is the world’s biggest conference and trade show for the podcast industry, and its 2019 show in August threw a spotlight on some of the latest developments in this fast-growing business.

CMI’s David Kirk was on hand to gain valuable insights on podcasting from the perspective of localization. Here are some key points from the show:

*One of the event’s esteemed speakers was Conal Byrne, the president and CEO of Stuff Media, and President of iHeartPodcast Network. Stuff Media is the world's leading for-profit publisher of podcasts, with more than 25 shows including “Stuff You Should Know,” and a library of over 10,000 episodes as well as over 1 billion downloads to date.

Byrne's Stuff Media exploded when it was purchased by iHeartMedia. He saw his salesforce go from eight to 2,000 and was able to tap into marketing budgets to promote its content and attract more talent. He saw the potential extensions of these podcasts, from touring programs to merchandise, and the iHeartPodcast Network is even testing interest in offshoot films. At its core, he believes in the power of storytelling to continue to grow in new ways: "I believe that fiction will continue to grow dramatically as our creators continue to expand and explore the 'theater of the mind,'" he said.

*Eric Nuzum, co-founder of Magnificent Noise and author of the soon-to-be-released Make Noise: A Creator's Guide to Podcasting, spoke to creators about how to make podcasts lucrative. He noted that as it stands now, podcasting has four sources of revenue: advertising, direct listener revenue, derivative rights, and investors (startup finds, grants, sponsorships.) He believes too many podcasts are launched because their creators think they have a great idea, without considering who will really be interested enough to listen. The smartest podcasters create content that solves problems, and prior to launching a program, ask themselves, "What is the problem? Whose problem is it? And, what problem does the podcast solve?'"

* Sarah Van Mosel of Stitcher also said she sees a big opportunity in distributing full-scale integrated ads into podcasts that are aimed at particular audiences — and that the curation of those audiences is crucial. She also sees the potential of multiple revenue streams, ranging from programmatic ads to in-host reads. The evolution of programmatic advertising, at scale, should generate significant revenue for those publishers who can build up a library of content.

*Another multi-speaker panel at the show discussed the impact of Google's transcription resources, which will allow podcasts to become more searchable, useful, and accessible. But automated transcription services still have to overcome the accuracy challenge; for example, even the best can only hit 95 percent percent accuracy, which leaves a great deal of room for miscommunication.

Interested in learning more about the potential to localize podcasts and how CMI can help? We’d love to hear from you.