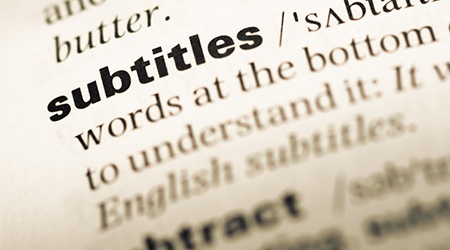 What Did That Say? The Art & Science Behind Readable Subtitles

You are watching a foreign film — let’s say, a mercurial love story. Except the timing of the subtitles is a little baffling. An angry volley of dialogue kicks in while they’re kissing. An onscreen slap comes a moment later, but the words have already moved on to apologetic self-denigration. Jarring action, out of sync with the dialogue. Either the love affair is taking place in Bellevue, or you have an inexperienced subtitler at the wheel.

It is hard to get into a story when you are fighting unreadable subtitles. Subtitling is both art and science — but the tech team has to be capable of both to make it seamless. When the technology and artistry are well-aligned in the hands of a seasoned professional, viewers can forget they are reading subtitles altogether. The process of making that happen is both simpler and more complex than you might think.

Each video can be seen as a mathematical formula. It takes 24 frames to create a second of action; multiply that out to make a minute or an hour of film, and you have a lot of frame options for placing your text.

The mechanism for making it happen works like this: Subtitling professionals have to pick an optimal frame to place the time code in – TC IN (when the subtitle should appear on-screen), and TC OUT (when it should leave the screen). The values reflect those captured frames, and all timecodes are a mathematical reflection of the frame-rate within the formula of the film’s runtime.

Subtitling for Both Slow and Fast-Paced Video

When the pace of a film is slow, and the language is dreamy, there is enough real estate for the TC IN and TC OUT within the action. Meaning, there is no issue with discordant text to images, or with reading speed. An average viewer will be able to process the text on screen well before the next line competes for attention.

However, when we have a fast-paced TV show or a documentary in front of us, the readability is a concern. The science behind optimal readability consists of properly placing the TC IN and TC OUT values, maybe compromising and starting the TC IN 10 frames before the audio instead of 4, thus adding the real-estate frames within a subtitle. In addition, the TC OUT value can be extended by several frames, so that we have a bit more to account for 12-15 character per-second values…meaning, the audience is comfortable reading the subtitles in time.

The Challenge of Crafting Subtitles for Different Audiences

When it comes to source material that’s in a different language than the target product, the translation is both art and science. It’s important to not only choose the right word to match the innuendo of the action — but to choose a word that has the fewest characters to increase the readability of the text in a short time.

Children’s programs, if not dubbed, call into account even more compression for readability. Two expressions of action might warrant two subtitles. But depending on the reading level of the viewers, you might not have the luxury of time to process both. Instead of having two subtitles, we may choose to merge the ideas into one subtitle, to slow down the reading pace for a young audience.

While we can use math to determine an initial placement, achieving appropriate and readable subtitles finally relies on the expertise of the translator and the CMI production team. Which means choosing professionals who have experience subtitling a wide range of major films over the years.

CMI has been putting words to film action for more than 30 years, and we’ve truly seen it all — from the explosive dialogue of violent argument, to the languid, mumbled subtlety of a love scene.

We’d love to help you with your subtitling challenges — globalizing your video, or creating film for multiple markets, so that the viewer will see your content as it was originally intended.

Contact us today for a consultation and, if you are a new client, we can do a free subtitling sample for you.

You may also want to see how CMI used dubbing to transform software company, Hubspot's training academy in our free downloadable case study.